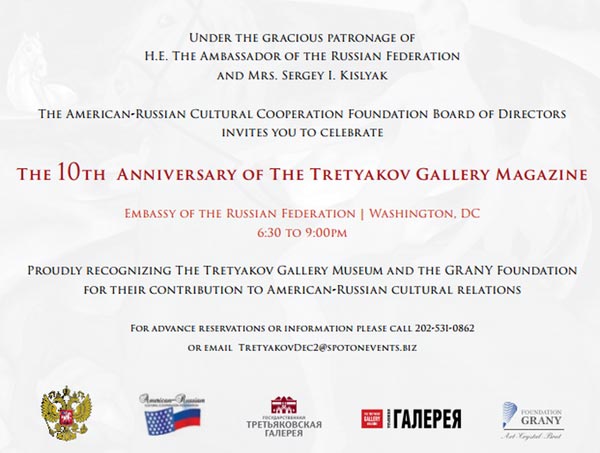 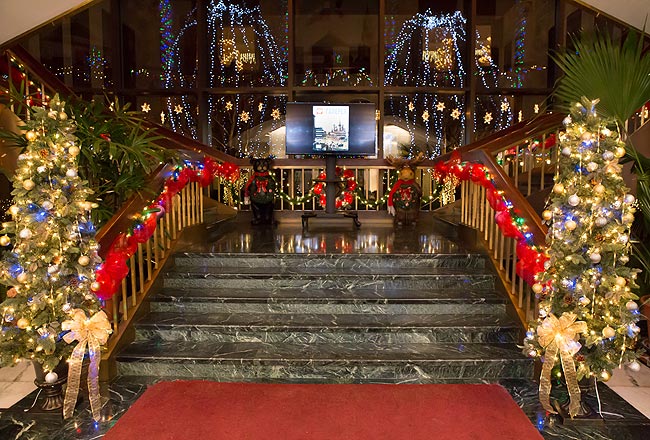 The American-Russian Cultural Cooperation Foundation
welcomes you
to the 10th Anniversary Celebration of the Tretyakov Gallery Magazine.

Ladies and Gentlemen, please welcome His Excellency, the Ambassador of the Russian Federation to the United States, and our host this evening, Sergey Kislyak.

It is my great privilege to introduce the Chairman of the American-Russian Cultural Cooperation Foundation, The Honorable James W. Symington.

Ambassador and Mrs. Kislyak, distinguished guests, there being no other kind, ladies and gentlemen, harken, if you will, to this kind message from Director of the Moscow State Tretyakov Gallery Irina Lebedeva…

Thank you Ms. Lebedeva, and thank you again Sergei for all your thoughtful initiatives over the years on behalf of US-Russian relations.

Once again I must express my appreciation of my fellow members of the ARCCF Board members and our Executive Director, Alexander Potemkin, who has been instrumental to our endeavors from the very start. The American-Russian Cultural Cooperation Foundation, having turned 21, takes a step back to thank those who have helped it reach it majority. The list begins with our esteemed host and hostess, Ambassador and Mrs. Sergey Kislyak, whose encouragement and support have sustained us over the years. As I have noted before, none of major undertakings could have flourished without the financial support of the American business community and its Russian counterpart, plus, indeed, that of such dear friends and financial contributors as those gathered here tonight. We have two groups of guests from Russia. One is our distinguished Russian delegation, who Natella will introduce later. We have another group who are colleagues of our great friend Dimitri Simes.

We are particularly honored with the presence of a timeless beauty who joins us this evening a treasured masterpiece from the State Tretyakov Gallery Museum’s permanent collection. This portrait was in the collection which visited New York as part of a prominent exhibition “RUSSIA” at the Guggenheim.

It is as recognizable to the Tretyakv Gallery as the Mona Lisa is to the Louvre.

Ladies and Gentlemen, may I present to you the portrait of an “Unknown Woman” by the 19th century artist Ivan Kramskoi.

We have an exciting program for you this evening, but first, I would like to read this message from the Mayor of the District of Columbia, The Honorable Vincent Gray (read Letter from Mayor).

And now, I have the pleasure to introduce our speaker Kim Sajet. Ms. Sayet assumed the position of director of the National Portrait Gallery on April 1. Before joining the Smithsonian, Ms. Sajet was the president and CEO of the Historical Society of Pennsylvania. Previously she was the Senior Vice President and Deputy Director of the Pennsylvania Academy of the Fine Arts, the oldest art museum and school in the country. From 1998 to 2001 Ms. Sajet was the director of corporate relations at the Philadelphia Museum of Art, and she served first, as curator and then director of two Australian art museums from 1998 until 1995. Please give a very warm welcome to Kim Sajet.”

Kim Sajet has her speech.

Natella Voiskounski, is the director of the GRANY.Art0Crystal-Brut Foundation, co-editor of the Tretyakov Gallery Magazine, and art-director of the International Art festival “Art-November”. She has also been running the ASTI art gallery in Moscow for more than 20 years. As an art critic she gives her special attention to introducing international art events to the Russain audiences. Please welcome Natella Voyskounski.

Your Excellency, Ambassador Kislyak, Mr. Symington, Ladies and Gentlemen, dear friends and colleagues! It is a great honor for me to speak on behalf of the Tretyakov Gallery magazine and the GRANY Foundation. It is now 10 years since the approval of the idea of the President of the GRANY Foundation, Irina Machitski, and the businessman Mr. Vitaly Machitski, their idea of launching the Russian-English art magazine affiliated with the Treasury of the Russian Art – The Tretyakov Gallery Museum. By the end of 2003 the idea had come true. Since that time we have been doing our best to bring Russian visual art to an international audience. We have established working contacts with world-renowned museums to bring the best of International art to our readers at home. Our special attention has been given to artists of the Russian origin who lived outside of Russia. Publications about Chagall, Kandinsky, Bakst, Soutine, Diaghilev, Mark Potko, Archipenko, Fechin, Bourlyuk, Benois di Stetto, Goncharova and Larionov, Serebryakova, Verevkina, Archil Gorky, von Jawlensky, Leonid Pasternak and others were of particular interest both to the general public and to specialists. Our pages feature classical and modern art, as well as well-known contemporary artists and the art historians and critics who have had personal ties with them. We have introduced our readers to the best world museums such as the Metropolitan, Whitney, MOMA, The Guggenheim, Tate Modern, Pompidou, Louvre, all most important Italian museums, and also museum of Paul Klee in Bern and Munch in Oslo. The major cross-cultural project of the GRANY Foundation, “On the Crossroads of Cultures,” is being brought about in collaboration with our colleagues from the USA, Italy, Norway, Switzerland and United Kingdom. Our international audience now has the opportunity to follow major exhibitions of Russian art at home and abroad. That is the subject of our jubilee issues, and we do hope you will enjoy reading in them about Russian art, and through Russian art will gain better insight into Russian history. Now a few minutes of our attention will be given to the video – presentation of the jubilee issues which opens with the portrait of the founder of the Tretyakov Gallery, Merchant and patron of arts Pavel Tretiakov.

Our special thanks, and the thanks of all those present here go to the General sponsor of the Tretyakov Gallery magazine, Vitaly Machitski and the President of the GRANY Foundation Irina Machitski, whose personal initiative, here is now a reality.

Terry Barber received his Bachelor of Music degree from Northwestern University and holds a Master's degree in music performance from London's Trinity College of Music. Mr. Barber has worked with many of the music industry's songwriters, composers and producers. He has appeared on albums with award-winning musicians such as Madonna and Cyndi Lauper Barber has performed on some of the world's most prestigious stages including New York City's Metropolitan Opera, Carnegie Hall, and Avery Fisher Hall; Moscow's Svetlana Hall and London's Queen Elizabeth Hall. And today we are honored to have him grace our stage – please welcome – Terry Barber!

[Acceptance Remarks by Alexander Rozhin] …ie,, hang in our office as a reminder of our friendship…

Dear Mrs. Symington, I sincerely regret that I could not attend the celebration on the occasion of the 10th jubilee of the Tretyakov Gallery Magazine. Taking this opportunity, I request you to accept “The Icon Collection in the Tretyakov Gallery” Album as a gift for the American-Russian Cultural Cooperation Foundation, in appreciation of your efforts in promoting the Russian culture and art and its spiritual heritage.

Duffey has his remarks.

A special addition to our celebration has been the culinary masterpieces which are displayed in the hallway. Each of our celebrated chefs from local restaurants were asked to interpret the Tretyakov Gallery Magazine cover of their choice.
We would like to thank them...

This evening you had the opportunity to vote for your favorite work-of-art cake design.
While all of the culinary offerings are spectacular – the votes are in and you have chosen your favorite by _____________[insert name].

In closing, I would like to direct your attention to the collection of vintage Russian Christmas and New Year’s postcards on display tonight. These vintage postcards present rare works of art from the pre-revolutionary period, and reflect Russian history and traditions through the past century. It is believed that the first Russian Christmas postcards were printed in 1898 by the Benefit Society of St. Eugene to raise funds for the Russian Red Cross. This evening we are honored to share some of the cards with beautiful scenes from the turn of the 20th century. We would like to thank ARCCF Board member Paul Rodzianko for sharing his private collection which are on display on the Christmas trees tonight.

Ladies & Gents dinner awaits and the culinary treats by our Pastry chefs…To which we repair with renewed thanks to Natella and congratulations to TGM and GRANY pozvolyayet s"yest' ("lets eat" in Russian).